I was in the middle of listening to Ball Four a few weeks ago. So it was weird to discover the last chapter in Jim Bouton's life ended.

Jim narrated his audio book (watch this link for his thoughts on the experience). And that made it feel eerie - as if your friend was just talking to you a few hours before he died.

The story Jim tells is so relatable. His obituary and this column touch on that theme. It captures a slice of a time and a place that’s long gone. Yet it still applies to anytime and anywhere.

There’s a constant struggle to hang in there at work – to be good enough. It's also a struggle to deal with all kinds of personalities. It was much more than I expected right down to the last sentence.

I'd like to have hung out with Jim for even 30 minutes. But I’m grateful he was still able to talk to me.

A lot of players were referenced in Ball Four – either directly by Jim or by someone in the book. One of them was Ted Williams:


Jim Pagliaroni was telling us how Ted Williams, when he was still playing, would psyche himself up for a game during batting practice, usually early practice before the fans or reporters got there 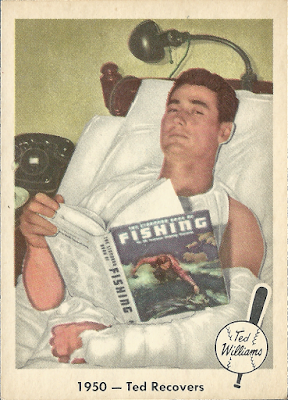 It's a superb 1959 Fleer oddball. And it's the second oldest baseball card with a phone (of the 1950's Bakelite variety). Fleer reprinted this card in 2004. If someone has one I’d trade for it.

Ted’s got a weird look on his face as if he’s annoyed with the world. Apparently that was a theme with Ted.

I finished reading The Sports Immortals, one of the spring cleaning books I'm selling. 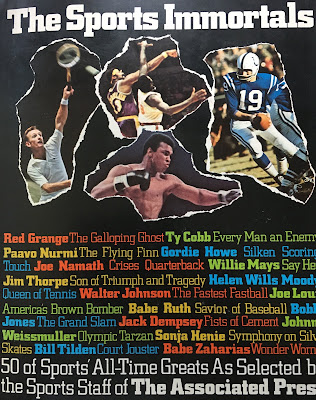 It goes into detail about Ted being annoyed by the press and fans. He even spit into a crowd and got fined the equivalent of $46,500 in today's dollars (5% of his salary). 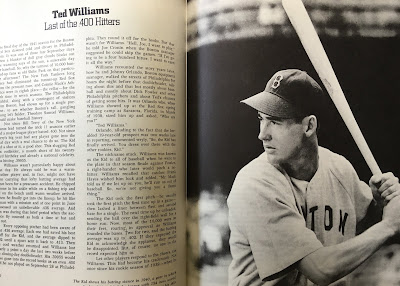 As Ted aged, his son John Henry managed Ted's life. According to this ESPN article it didn't sound fun for Ted. His son also apparently pushed to freeze Ted cryogenically.  One story gets into some wacky, gory details about his frozen head.

Both Jim and Ted's death reminds me that in the end we’re all the same. Life can be large and filled with lots of fans, but it shrinks as you age. It dwindles down to those closet to you in relationship or proximity. So choose wisely. 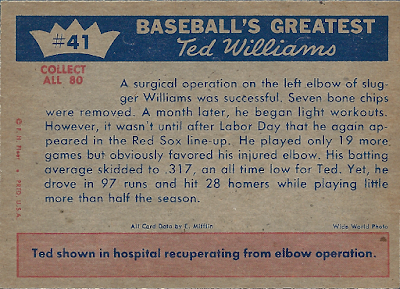 Card facts: it's card #41 out of an 80 card set focused on Ted Williams. Apparently #68 was pulled out of production and is expensive (plus forged a lot). Glad I don't need or want that one.

Current Availability: common but not cheap (especially for ones in nicer shape, like the one I got)

I was in the middle of listening to Ball Four a few weeks ago. So it was weird to discover the last chapter in Jim Bouton's life ended....